• Reports net loss from continuing operations of $238 million for the second quarter 2020, including a pre-tax, non-cash asset impairment charge of $162 million
• Posts Adjusted EBITDA(1) of $17 million for the second quarter 2020
• Maintains strong cost management in all operating segments and overhead
• Executes on long-term strategic portfolio optimization
• Reduces long-term debt by approximately $25 million in the second quarter of 2020
• Continues conservative financial management with liquidity of $240 million at quarter-end and $66 million in AMT refunds expected to be received in second half of 2020

“Our second quarter results serve as continued evidence of Contura’s commitment to adeptly managing through the current global uncertainty,” said chairman and chief executive officer, David Stetson. “Even with a weeks-long furlough in April, our team increased our cash quarter-over-quarter, lowered our overall debt, and kept costs roughly on par with our stellar first quarter cost performance. As we look to the back half of 2020, we believe these steps to streamline our company will serve us well despite any additional market fluctuations that may occur.”

Contura reported a net loss from continuing operations of $238.3 million, or $13.02 per diluted share, for the second quarter 2020. The second quarter loss includes a pre-tax, non-cash asset impairment charge of $161.7 million, which resulted primarily from our strategic decisions to idle the Kielty mine and not pursue the new impoundment at Cumberland resulting in a significantly shorter mine life. In the first quarter 2020, the company had a net loss from continuing operations, including non-cash asset impairment charges of $33.7 million, of $39.8 million or $2.18 diluted share.

Total Adjusted EBITDA was $17 million for the second quarter, compared with $60 million in the first quarter, primarily due to lower CAPP – Met price realizations.


1. Represents Non-GAAP coal revenues which is defined and reconciled under “Non-GAAP Financial Measures” and “Results of Operations.”

The CAPP – Met revenue decline in the second quarter was driven by an $11 per ton decline in price realizations relative to the first quarter. CAPP – Thermal revenues also declined quarter-over-quarter due to lower realized prices. Second quarter NAPP revenues were lower as a result of lower volumes and prices.

1. Represents Non-GAAP coal sales realization which is defined and reconciled under “Non-GAAP Financial Measures” and “Results of Operations.”


1. Represents Non-GAAP cost of coal sales per ton which is defined and reconciled under “Non-GAAP Financial Measures” and “Results of Operations.”

1. Represents Non-GAAP SG&A which is defined under “Non-GAAP Financial Measures.”

As a result of additional overhead reductions, Contura’s second quarter 2020 SG&A expenses were $10.1 million, excluding non-cash stock compensation expense and one-time expenses of $1.9 million, and down $3.3 million from the prior quarter. Contura expects non-GAAP SG&A expenses for the full year 2020 to be in the range of $45 million to $50 million.

“In response to the wide-ranging impacts of the COVID-19 pandemic, we took aggressive action in early April to optimize cash by temporarily idling certain operations, which resulted in a $41 million reduction in inventory and overall net working capital change of $99 million in the second quarter,” said Andy Eidson, Contura’s chief financial officer. “As we continue to analyze our liquidity, we expect capex for the remainder of the year to be in the $45-$50 million range, and we still anticipate receiving an accelerated AMT tax refund of approximately $66 million in the second half of the year and approximately $14 million of payroll tax deferrals until 2021 and 2022.”

As of June 30, 2020, Contura had $238.4 million in unrestricted cash and $157.5 million in restricted cash, deposits and investments. Total long-term debt, including the current portion of long-term debt as of June 30, 2020, was $628.1 million, down approximately $25 million from the prior quarter. At the end of the second quarter, the company had total liquidity of $240.2 million, including cash and cash equivalents of $238.4 million and $1.8 million of unused commitments available under the Asset-Based Revolving Credit Facility. The future available capacity under the Asset-Based Revolving Credit Facility is subject to inventory and accounts receivable collateral requirements and the achievement of certain financial ratios. As of June 30, 2020, the company had $30.8 million in borrowings and $121.7 million in letters of credit outstanding under the Asset-Based Revolving Credit Facility.

As previously announced, certain operations were temporarily idled in early April in response to market conditions, inventory levels and expected customer deferrals. As of May 4, all Contura sites were back to nearly normal staffing levels and operating capacity with additional precautions in place to help reduce the risk of exposure to COVID-19.

On June 22, the company announced that its Ruby Energy (also known as Kielty) underground mine and the Delbarton Preparation Plant were to be idled due to adverse market conditions and uneconomic pricing and cost structures. Kielty produces both thermal and metallurgical coal.

During the second quarter, the company also decided against spending over $60 million for a refuse impoundment at Cumberland Mine and amended its supply agreements to expire as of December 31, 2022. Unless a buyer emerges for the Cumberland Mine, the company will cease operations upon the expiration of its outstanding coal supply commitments in late 2022 or early 2023.

Also in June, the company completed the acquisition of the Feats Loadout facility in Logan County, West Virginia, which is served by the CSX railroad. With this transaction, Contura adds transportation optionality to its existing network and increased ability to leverage low vol metallurgical coal sales opportunities through Dominion Terminal Associates.

Looking ahead, the company continues to progress on its capital projects and its shift to higher-quality, lower-cost mines. “Even in spite of the disruptions caused by the COVID-19 pandemic, development at our new metallurgical mines remains on schedule,” said Jason Whitehead, Contura’s chief operating officer. “The low vol Road Fork No. 52 Mine added a second production section in mid-June, and will be positioned to be at three sections by the first of 2021, while the high vol project at Lynn Branch has completed initial underground cuts and expects to be in production by the fourth quarter of this year. The Black Eagle Mine, our high vol A project, is progressing well through the corridor to the main reserve block, which we anticipate to be in production by next year.”

The company plans to hold a conference call regarding its second quarter 2020 results on August 7, 2020, at 10:00 a.m. Eastern time. The conference call will be available live on the investor section of the company’s website at https://investors.conturaenergy.com/investors. Analysts who would like to participate in the conference call should dial 866-270-1533 (domestic toll-free) or 412-317-0797 (international) approximately 15 minutes prior to the start of the call.

CONTURA ENERGY, INC. AND SUBSIDIARIES CONDENSED CONSOLIDATED STATEMENTS OF OPERATIONS (Unaudited)
(Amounts in thousands, except share and per share data) 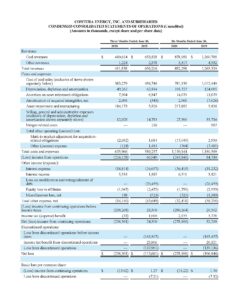 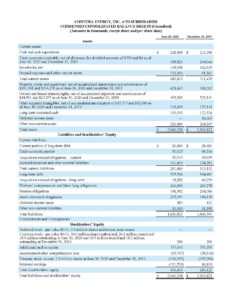 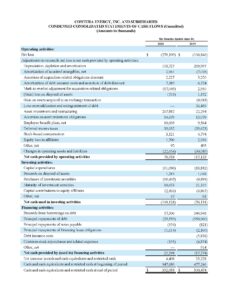 CONTURA ENERGY, INC. AND SUBSIDIARIES RESULTS OF OPERATIONS
(Amounts in thousands, except for per ton data) 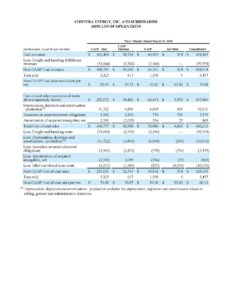