• Posts net income from continuing operations of $251.8 million, or $14.21 per diluted share, for the quarter
• Reports third quarter Adjusted EBITDA of $294.9 million
• Generates quarterly operating cash flow of $497.0 million
• Announces 4.5 million tons of 2023 domestic sales commitments at an average price of $192.27 per ton
• Announces cumulative $452 million in buybacks through share repurchase program as of October 31, 2022
• Increases share buyback authorization to $1 billion from prior level of $600 million
• Announces one-time, special dividend of $5.00 per share
• Increases quarterly dividend amount to 41.8 cents per share

“Alpha’s third quarter results represent another solid performance from our team,” said David Stetson, Alpha’s chair and chief executive officer. “Evident within this quarter’s numbers is the natural impact of the coal indices’ drop from their early-2022 historic highs. Even still, indices remain at levels that are considered very strong from a historical average perspective, and Alpha’s nearly $300 million in Adjusted EBITDA for the quarter is likewise a strong showing for our company.”

Stetson continued: “To further enhance our already-robust capital return efforts, I am pleased to announce that Alpha’s board has approved a 400-million-dollar increase to the existing share repurchase authorization, bringing the total authorization to an impressive $1 billion. In addition, the board has increased the fixed dividend to 41.8 cents per share and approved a one-time, special dividend of five dollars per share in recognition of the extraordinarily positive performance of the Alpha team this year. We remain committed, as always, to prudently returning capital to shareholders.”

The table below provides a breakdown of our Met segment coal sold in the third quarter by pricing mechanism.

Alpha’s third quarter Met segment cost of coal sales decreased to an average of $104.86 per ton, with reduced sales-related costs from royalties and severance taxes accounting for the drop from the second quarter level of $111.36. Cost of coal sales for the All Other category increased to $67.48 per ton in the third quarter 2022 against an average cost of $49.90 per ton in the second quarter 2022. The higher costs in third quarter are attributable to higher sales-related costs and the impacts of late-stage mining at our Slabcamp mine.

On September 13, 2022, Alpha announced that the company has committed approximately 4.5 million tons of metallurgical coal to domestic customers for shipment in the calendar year 2023. Those 4.5 million tons are committed at an average price of $192.27 per ton.

“As we advance through our budgeting process to finalize our expectations for the coming year, we are pleased to have a firm foundation of 4.5 million tons of domestically-committed coal on which we can continue to build,” said Andy Eidson, Alpha’s president. “Our sales team continues to do an excellent job of working with new and longstanding customers, and we are taking a close look at the full scope of international opportunities available to Alpha in 2023. Together in coordination with our operations teams, we will round out our guidance projections and plans for 2023. We are optimistic about Alpha’s outlook for next year and we will provide more detail around our 2023 expectations in the coming weeks.”

Any decision to pay future cash dividends will be made by the board and depend on Alpha’s future earnings and financial condition and other relevant factors.

As previously announced, Alpha’s board of directors authorized a share repurchase program allowing for the expenditure of up to $600 million for the repurchase of the company’s common stock. On November 4, Alpha’s board increased this authorization by $400 million, bringing the total authorization to $1 billion. As of October 31, 2022, the company has acquired 3.1 million shares of common stock at a cost of $452 million, which has reduced the outstanding share count by roughly 14 percent from the time the program began. The number of common stock shares outstanding as of October 31, 2022 is 15,943,649.

The timing and amount of share repurchases will continue to be determined by the company’s management based on its evaluation of market conditions, the trading price of the stock, applicable legal requirements, compliance with the provisions of the company’s debt agreements, and other factors.

Notes:
1. Based on committed and priced coal shipments as of October 28, 2022. Committed percentage based on the midpoint of shipment guidance range.
2. Actual average per-ton realizations on committed and priced tons recognized in future periods may vary based on actual freight expense in future periods relative to assumed freight expense embedded in projected average per-ton realizations.
3. Includes estimates of future coal shipments based upon contract terms and anticipated delivery schedules. Actual coal shipments may vary from these estimates.
4. Note: The Company is unable to present a quantitative reconciliation of its forward-looking non-GAAP cost of coal sales per ton sold financial measures to the most directly comparable GAAP measures without unreasonable efforts due to the inherent difficulty in forecasting and quantifying with reasonable accuracy significant items required for the reconciliation. The most directly comparable GAAP measure, GAAP cost of sales, is not accessible without unreasonable efforts on a forward-looking basis. The reconciling items include freight and handling costs, which are a component of GAAP cost of sales. Management is unable to predict without unreasonable efforts freight and handling costs due to uncertainty as to the end market and FOB point for uncommitted sales volumes and the final shipping point for export shipments. These amounts have historically varied and may continue to vary significantly from quarter to quarter and material changes to these items could have a significant effect on our future GAAP results.
5. Excludes expenses related to non-cash stock compensation and non-recurring expenses.
6. Rate assumes no further ownership change limitations on the usage of net operating losses.

The company plans to hold a conference call regarding its third quarter 2022 results on November 7, 2022, at 10:00 a.m. Eastern time. The conference call will be available live on the investor section of the company’s website at https://investors.alphametresources.com/investors. Analysts who would like to participate in the conference call should dial 877-407-0832 (domestic toll-free) or 201-689-8433 (international) approximately 15 minutes prior to start time. 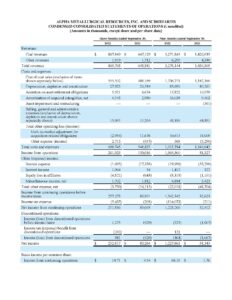 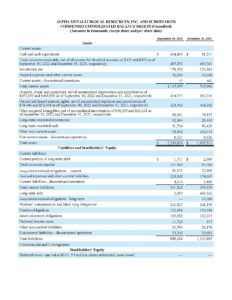 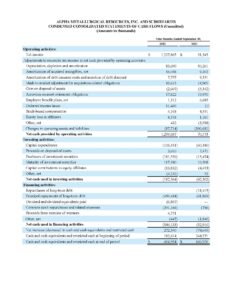 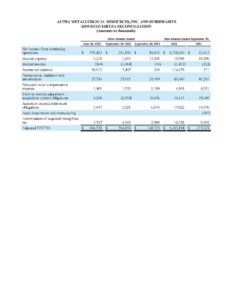 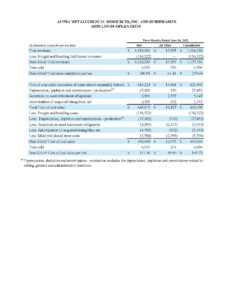