“After meeting our stated goal of paying off the long-term debt, the Alpha team has posted yet another record quarter, with Adjusted EBITDA of nearly $700 million,” said David Stetson, Alpha’s chair and chief executive officer. “Eliminating the debt was a key goal of mine because I believed it would create a more stable company with the flexibility to weather the inevitable market volatility that this industry experiences. The fact that we were able to pay off the debt in such a short period of time is a testament not only to the strength of the recent coal markets but also to the steadfast resolve and discipline of our team.”

Stetson continued: “With these recent accomplishments, Alpha has entered a new and exciting chapter, and I believe the end of this calendar year is the right time to hand over the reins of day-to-day leadership of the company to Andy Eidson. Like most public companies, Alpha’s board of directors and executive management routinely engage in succession planning to prepare for and effectively handle leadership transitions. Andy and I have therefore worked together closely for many years. Now, as I prepare for retirement, we will focus on a seamless transition. He is exceedingly well prepared to take on the CEO role, and his vision for the company is an extension of what we have demonstrated the last few years – financial discipline, excellence and reliability in all aspects of our work, and a firm commitment to creating and maintaining shareholder value. It has been my great honor to lead Alpha, and I look forward to continuing my involvement as executive chairman of the board of directors.”

Total Adjusted EBITDA for the second quarter was a record $694.5 million, compared with $503.8 million in the first quarter 2022.

Our net realized pricing for the Met segment was $286.95 per ton in the second quarter 2022, while net realization in the All Other category was $61.41.

The table below provides a breakdown of our Met segment coal sold in the second quarter by pricing mechanism.

On June 3, 2022, Alpha made a voluntary prepayment of $99.4 million on its term loan, which eliminated all remaining principal and paid the loan in full.

As previously announced, in connection with Alpha’s improved financial position, the company received a reduction of $40.1 million in collateral requirements related to its self-insured workers compensation at certain locations in West Virginia. Additionally, as part of routine surety program review and negotiation, the company received a $16.5 million reduction in surety collateral requirements, while securing multi-year visibility on surety program terms and conditions.

“Thanks to the strength of the metallurgical market in the first half of the year, we fully eliminated our term loan balance, further enhancing our balance sheet,” said Andy Eidson, Alpha’s president and chief financial officer. “As a result of this good work, we have also received a reduction in collateral requirements and visibility into surety terms and conditions for the coming years. Additionally, Alpha’s corporate family rating was recently upgraded due in large part to our discipline in eliminating the debt. These are all positive developments for the company and our many stakeholders.”

Cash provided by operating activities in the second quarter significantly increased to $465.9 million as compared to $336.1 million in the first quarter 2022. Cash provided by operating activities includes discontinued operations. Capital expenditures for the second quarter 2022 were $41.9 million compared to $28.1 million for the first quarter of 2022.

As of June 30, 2022, Alpha had $161.7 million in unrestricted cash and $130.9 million in restricted cash, deposits and investments. Total long-term debt, including the current portion of long-term debt as of June 30, 2022, was $4.7 million. At the end of the second quarter, the company had total liquidity of $252.8 million, including cash and cash equivalents of $161.7 million and $91.1 million of unused availability under the ABL. The future available capacity under the ABL is subject to inventory and accounts receivable collateral requirements and the maintenance of certain financial ratios. As of June 30, 2022, the company had no borrowings and $63.9 million in letters of credit outstanding under the ABL.

Any decision to pay future cash dividends will be made by the board and depend on Alpha’s future earnings and financial condition and other relevant factors.

Lead independent director, Michael Quillen, offered the following statement on Stetson’s retirement and Eidson’s appointment: “On behalf of the board, we want to thank David Stetson for the exceptional job he has done in leading Alpha. He has guided the executive team in overcoming many hurdles to build the outstanding company that is today announcing yet another record quarter. Having accomplished the goals he set forth when he came on board, David understandably wants to begin transitioning into retirement, and we wish him well in this new phase of life. We are grateful for the opportunity to retain his expertise and vision as executive chairman of the board. Additionally, the board is excited about Andy Eidson’s appointment as Alpha’s next CEO. He is not only exceptionally capable of building on the firm foundation that David has created, Andy is also bright, well-qualified, and brings a valuable perspective that can help propel Alpha into its next chapter as a more resilient company.”

Andy Eidson commented on today’s announcement: “I cannot thank David enough for all he has done for Alpha. I can attest to the lasting impact he has made, not only on this company, but also on me, through his leadership and vision. It has been a great honor to be a part of his executive team, and I look forward to continuing the positive momentum he created. I am humbled by the opportunity to serve as Alpha’s next chief executive, and, together with the exceptional people in this organization, I will strive toward continuous improvement, safe production each and every day, and further solidifying Alpha’s role as the industry leader. I thank the board for the confidence they have shown by offering me this opportunity and I look forward to the path ahead.”

Quillen continued: “The board has great confidence in Jason Whitehead as he expands his role to include serving as the company’s president, and in Todd Munsey as he takes over the reins as chief financial officer. Both individuals are highly qualified and will continue to serve Alpha well in their new roles. All in all, we believe Alpha continues to be positioned for long-term success with an outstanding, experienced, and industry-leading management team.”

As previously announced, Alpha’s board of directors authorized a share repurchase program allowing for the expenditure of up to $600 million for the repurchase of the company’s common stock. As of August 5, the company has acquired 1,892,954 shares of common stock at a cost of $268.0 million.

The timing and amount of share repurchases will continue to be determined by the company’s management based on its evaluation of market conditions, the trading price of the stock, applicable legal requirements, compliance with the provisions of the company’s debt agreements, and other factors.

“As a result of the European energy crisis caused by the Russian war, the thermal coal markets have shown significant volatility and increasing demand in recent months,” said Jason Whitehead, executive vice president and chief operating officer. “We fulfilled some customer requests for incremental thermal tonnage in the second quarter, which has pushed our expected total thermal volumes over the established guidance ranges for the year. Therefore, we are adjusting our shipment guidance to accommodate for these unique circumstances. Additionally, as a result of increased incentive compensation due to performance against budgeted metrics, we are increasing our guidance for selling, general and administrative expenses for the year.”

Alpha is increasing SG&A guidance to a range of $55 million and $59 million, up from the prior range of $50 million to $54 million.

Notes:
1. Based on committed and priced coal shipments as of July 22, 2022. Committed percentage based on the midpoint of shipment guidance range.
2. Actual average per-ton realizations on committed and priced tons recognized in future periods may vary based on actual freight expense in future periods relative to assumed freight expense embedded in projected average per-ton realizations.
3. Includes estimates of future coal shipments based upon contract terms and anticipated delivery schedules. Actual coal shipments may vary from these estimates.
4. Note: The Company is unable to present a quantitative reconciliation of its forward-looking non-GAAP cost of coal sales per ton sold financial measures to the most directly comparable GAAP measures without unreasonable efforts due to the inherent difficulty in forecasting and quantifying with reasonable accuracy significant items required for the reconciliation. The most directly comparable GAAP measure, GAAP cost of sales, is not accessible without unreasonable efforts on a forward-looking basis. The reconciling items include freight and handling costs, which are a component of GAAP cost of sales. Management is unable to predict without unreasonable efforts freight and handling costs due to uncertainty as to the end market and FOB point for uncommitted sales volumes and the final shipping point for export shipments. These amounts have historically varied and may continue to vary significantly from quarter to quarter and material changes to these items could have a significant effect on our future GAAP results.
5. Excludes expenses related to non-cash stock compensation and non-recurring expenses.
6. Rate assumes no further ownership change limitations on the usage of net operating losses.

The company plans to hold a conference call regarding its second quarter 2022 results on August 8, 2022, at 10:00 a.m. Eastern time. The conference call will be available live on the investor section of the company’s website at https://investors.alphametresources.com/investors. Analysts who would like to participate in the conference call should dial 877-407-0832 (domestic toll-free) or 201-689-8433 (international) approximately 15 minutes prior to start time. 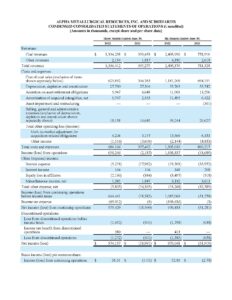 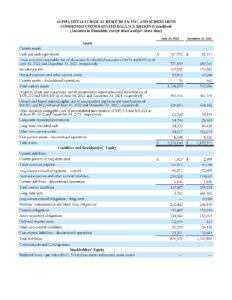 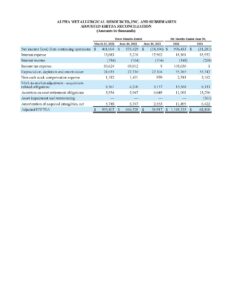 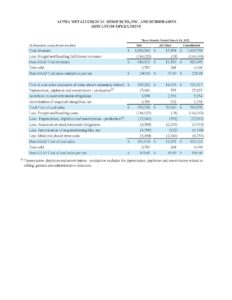