“We have consistently reiterated that Alpha is well-positioned to capitalize on market opportunities and this quarter’s outstanding performance is proof of our ability to deliver on those high expectations,” said David Stetson, Alpha’s chair and chief executive officer. “Additionally, we made meaningful progress on our commitment to deleveraging the company by reducing our overall long-term debt and legacy obligations by more than $75 million during the quarter. We expect to continue this positive momentum to create value for our shareholders, and we look forward to what we believe will be a productive and successful 2022.”

Total Adjusted EBITDA was $148.2 million for the third quarter, compared with $39.9 million in the second quarter 2021.

In the third quarter our net realized pricing for the Met segment was $113.51, while net realization in the All Other category was $62.43.

“As expected, third quarter met export realizations came in strong thanks to the robust market and the outstanding work of our sales team to capitalize on it,” said Andy Eidson, Alpha’s president and chief financial officer. “The vast midyear improvement in the Australian indices is now evident in our financial performance, with third quarter realizations on export tons tied to Aussie indices up $91.10, or 134%, from second quarter levels. Realizations for export tons priced against other mechanisms were up $23.64, or 23%, from second quarter realizations.”

The table below provides a breakdown of our Met segment coal sold in the third quarter by pricing mechanism.

(in millions, except per ton data)

“In higher pricing environments, costs of coal sales increase due to a number of factors outside our direct control, including royalties and taxes,” said Jason Whitehead, executive vice president and chief operating officer. “Similar to many other companies, we’re also experiencing some inflationary pressure with the cost of materials increasing. Despite these challenges, I’m proud of our operations teams for remaining disciplined and continuing to manage the costs we can control.”

“Beyond Alpha’s very positive revenue results, we reduced our long-term debt and legacy obligations by over $75 million during the third quarter,” said Eidson. “In addition to $6.6 million in scheduled long-term principal payments for the quarter, we elected to make a voluntary prepayment of $31.0 million in principal on the term loan, and we repurchased, at a discount, roughly $18.7 million in outstanding principal borrowings from existing lenders. Coupled with the previously-announced $21.2 million payment in July to extinguish the reclamation funding obligations with the West Virginia Department of Environmental Protection (WVDEP), these actions should serve as a roadmap for what shareholders can expect from us in the coming quarters as we continue strengthening our balance sheet.”

“Subsequent to the quarter end, we made an early payment of $4 million to the WVDEP eliminate the legacy obligations related to water treatment in West Virginia. Additionally, we made a payment of $3.3 million to fully satisfy the remaining legacy reclamation funding and water treatment obligations owed to the State of Kentucky. This follows our early extinguishment of the West Virginia reclamation funding obligations that was announced last quarter. These examples further demonstrate our strong commitment to debt reduction and deleveraging the company,” Eidson said.

As of September 30, 2021, Alpha had $78.3 million in unrestricted cash and $121.7 million in restricted cash, deposits and investments. Total long-term debt, including the current portion of long-term debt as of September 30, 2021, was $505.2 million. At the end of the third quarter, the company had total liquidity of $183.3 million, which represents an increase of 38% compared to our total liquidity at the end of the second quarter, including cash and cash equivalents of $78.3 million and $105.0 million of unused availability under the Asset-Based Revolving Credit Facility (ABL). The future available capacity under the ABL is subject to inventory and accounts receivable collateral requirements and the maintenance of certain financial ratios. As of September 30, 2021, the company had no borrowings and $120.0 million in letters of credit outstanding under the ABL.

“Alpha’s exceptional third quarter performance is a testament to the continued dedication of our operations teams and the success of our ongoing portfolio optimization efforts,” said Whitehead. “With Slabcamp, our sole remaining thermal mine, on pace to close in the summer of next year, our 2022 production guidance reflects the final stage of our transition to a pure-play metallurgical resources company. As we look forward to capitalizing on current market opportunities, 2022 Met segment production is expected to increase slightly over the already-increased full year 2021 guidance level. I’m confident that our teams across the enterprise have the ability to deliver on these ambitious goals we’ve outlined for the coming year.”

During the quarter, a number of key structural milestones were met to add the fourth section at Road Fork 52, putting the project ahead of schedule and allowing the section to begin producing in mid-October. Additionally, the company has recently completed its budget for 2022, and our capital expenditures guidance for next year includes several important projects that will help modernize and strategically improve Alpha’s operations and prep plant infrastructure. These upgrades are expected to provide increased efficiency and extend the life of these facilities in return for modest levels of capital investment.

Whitehead commented on the importance of capex projects in 2022: “As we envision what Alpha can do in the next several years, we recognize the critical role that preparation plants play in washing and loading the coal we mine and preparing it for delivery to our customers. In partnership with our sales teams, we aim to maximize these facilities, and we believe modest investment in a few of our plants will allow for additional output and better capabilities for the specific coal qualities we’re sending through each facility. Additionally, we plan to begin development on the Cedar Grove No. 3 mine and the Glen Alum mine in the coming year. Both of these locations are adjacent to current Alpha operations in West Virginia, allowing us to leverage existing infrastructure as we expand into these mines. Lastly, we have decided to move ahead with adding a fourth section at our Lynn Branch mine. All together, we see this group of projects as a boost to the organization’s future efficiency and effectiveness. Furthermore, we believe we can accomplish each of these in a timely manner and at a very reasonable investment level. Therefore, at the midpoint, our capex guidance for next year includes an increased maintenance capital projection of approximately $120 million dollars to account for inflation, and roughly $55 million to invest in Alpha’s future through various projects across the organization.”

Additionally, with depreciation, depletion and amortization trending lower for the year, we are adjusting DD&A guidance down to a range of $100 million to $110 million from the prior range of $125 million to $145 million.

SG&A is expected to be in the range of $50 million to $54 million, excluding non-recurring expenses and non-cash stock compensation. Idle operations expense for 2022 is expected to be between $30 million and $40 million. The company expects cash interest expense to be in a range of $40 million to $45 million for 2022. Depreciation, depletion and amortization guidance is anticipated to be between $90 million and $110 million for the year. Our overall 2022 capital expenditures guidance of $160 million to $190 million includes a number of planned upgrades expected to enhance Alpha’s longevity and positioning for the future. Lastly, the company expects its tax rate for 2022 to be in the 5% to 15% range.


Notes:
1. Based on committed and priced coal shipments as of October 29, 2021. Committed percentage based on the midpoint of shipment guidance range.
2. Actual average per-ton realizations on committed and priced tons recognized in future periods may vary based on actual freight expense in future periods relative to assumed freight expense embedded in projected average per-ton realizations.
3. Includes estimates of future coal shipments based upon contract terms and anticipated delivery schedules. Actual coal shipments may vary from these estimates.
4. Note: The Company is unable to present a quantitative reconciliation of its forward-looking non-GAAP cost of coal sales per ton sold financial measures to the most directly comparable GAAP measures without unreasonable efforts due to the inherent difficulty in forecasting and quantifying with reasonable accuracy significant items required for the reconciliation. The most directly comparable GAAP measure, GAAP cost of sales, is not accessible without unreasonable efforts on a forward-looking basis. The reconciling items include freight and handling costs, which are a component of GAAP cost of sales. Management is unable to predict without unreasonable efforts freight and handling costs due to uncertainty as to the end market and FOB point for uncommitted sales volumes and the final shipping point for export shipments. These amounts have historically varied and may continue to vary significantly from quarter to quarter and material changes to these items could have a significant effect on our future GAAP results.
5. Excludes expenses related to non-cash stock compensation and non-recurring expenses.
6. Rate assumes no further ownership change limitations on the usage of net operating losses.

The company plans to hold a conference call regarding its third quarter 2021 results on November 5, 2021, at 10:00 a.m. Eastern time. The conference call will be available live on the investor section of the company’s website at https://investors.alphametresources.com/investors. Analysts who would like to participate in the conference call should dial 844-200-6205 (domestic toll-free) or 929-526-1599 (international) approximately 15 minutes prior to start time. Please use the access code 475225 to join the call. 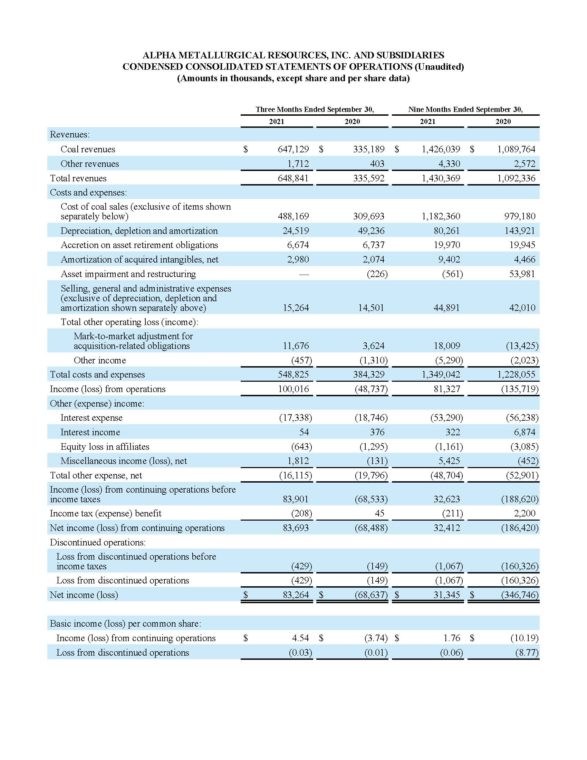 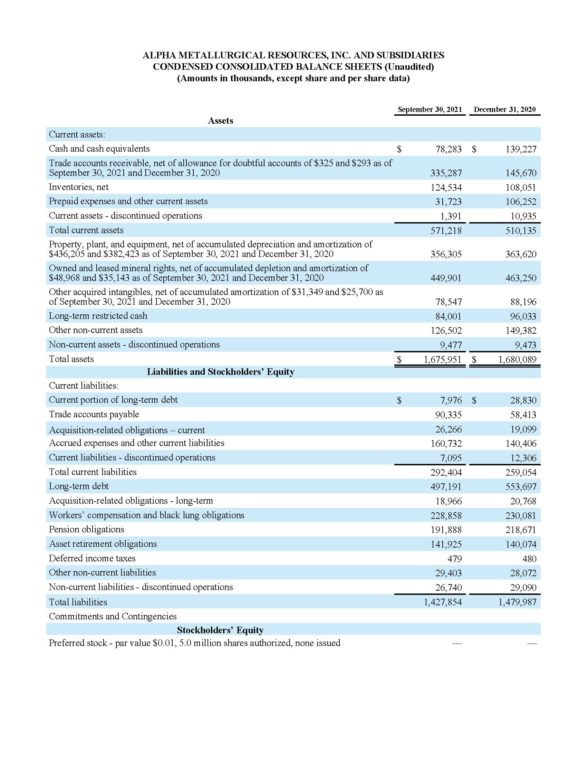 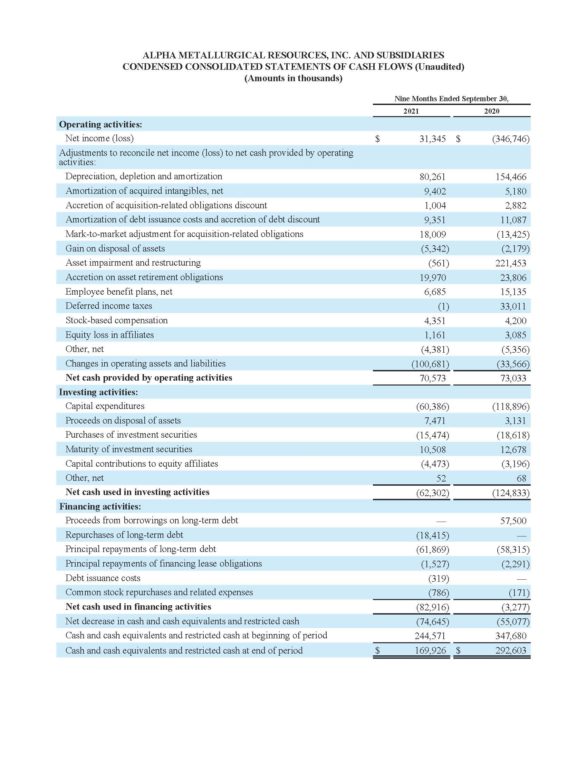 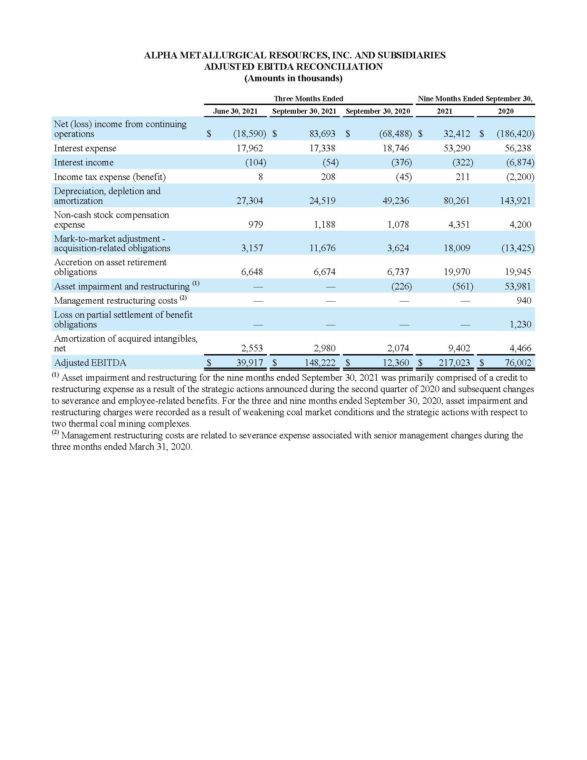 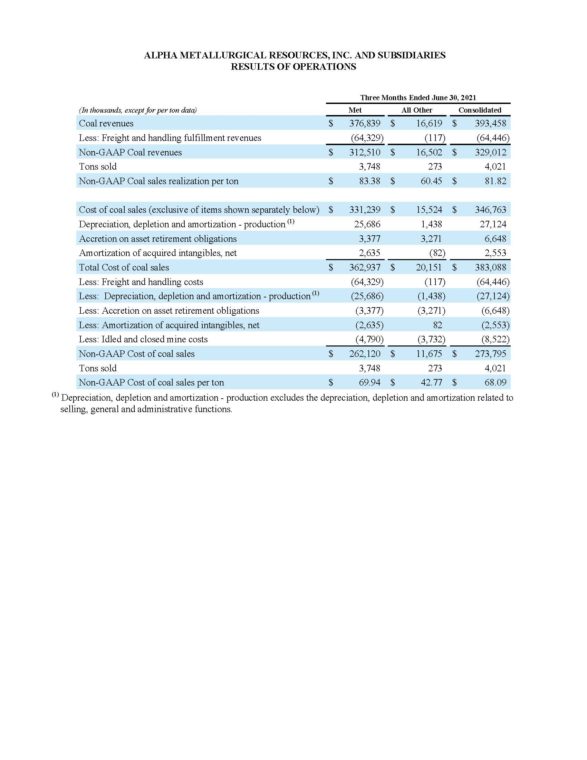