“This has been a very challenging year for the coal industry, whether dealing with the pandemic or navigating the disruption of the coal supply resulting from the dispute between Australia and China; however, our team at Alpha stayed focused and disciplined. While we didn’t have any greater insights or vision into the markets than others as we started the year, we believed that if we continued our efforts to modernize our coal operations with newer and more efficient mines, streamline decision making and allocate capital for projects that support our diversified product offerings to meet customer demands, we would be rewarded for those efforts when the markets rebounded,” said David Stetson, Alpha’s chair and chief executive officer. “As we look to the back half of the year and into the promising 2022 markets, we think those efforts are beginning to pay off. The capital investments we made over the past several years have matured, and the diversity of our product offerings continues to provide us with optionality in the marketplace, where demand remains high. With increased pricing and strong margins, we plan to build our cash balance and take aggressive steps to pay down our existing debt.”

Total Adjusted EBITDA was $39.9 million for the second quarter, compared with $28.9 million in the first quarter 2021.

In the second quarter our net realized pricing for the Met segment was $83.38, however, our export sales into markets not tied to Australian indices averaged $101.80 per ton for the quarter. “Alpha has long standing contractual arrangements that have historically provided us with excellent margins and access to the one of the fastest growing markets for Met coal. Those arrangements are tied to Australian indices, which resulted in net realizations of $67.77 in the second quarter, weighing down our overall net realizations,” Andy Eidson, Alpha’s president and chief financial officer, said. “It is important to note that the Australian premium hard coking coal index has increased nearly 60% from the average during the second quarter, with the current pricing of approximately $215 per metric ton bringing it in line with Atlantic Basin pricing. Approximately 21% of our met production at the midpoint of full-year guidance is unpriced and should benefit from this improved pricing environment in the back half of the year.”

The table below provides a breakdown of our Met segment coal sold in the second quarter by pricing mechanism, illustrating the contrast between Australian and Atlantic pricing found in the average realization for the quarter.

“The transition from higher cost and lower efficiency mines to our new mines such as Road Fork 52 and Lynn Branch enabled us to maintain our costs near the lower end of guidance,” said Jason Whitehead, executive vice president and chief operating officer. In the second quarter, the company’s Met segment cost of coal sales improved to an average of $69.94 per ton, down from $71.72 in the prior quarter.

Cost of coal sales for the All Other category dropped slightly as well to $42.77 in the second quarter as compared to an average cost of $43.05 in the first quarter.

“Alpha posted another solid quarter of financial performance, especially in light of the lingering headwinds from the weak Australian indices that limited our overall realizations for the period,” said Eidson. “While our cash balance decreased during the quarter due primarily to inventory build, our total liquidity increased by $24 million.”

“Subsequent to the quarter end, we made a $21 million payment to eliminate the West Virginia Lexington Coal Company (LCC) note a year ahead of schedule and, after the negotiated return of $14 million of related surety collateral, at a lower net cash outflow than was previously expected. This early extinguishment of a legacy liability is further evidence of our commitment to strategically reducing debt and strengthening the company’s balance sheet,” Eidson said.

As of June 30, 2021, Alpha had $72.3 million in unrestricted cash and $134.8 million in restricted cash, deposits and investments. Total long-term debt, including the current portion of long-term debt as of June 30, 2021, was $579.7 million. At the end of the second quarter, the company had total liquidity of $132.3 million, which represents an increase of over 20% compared to our total liquidity at the end of the first quarter, including cash and cash equivalents of $72.3 million and $60.0 million in unused availability under the Asset-Based Revolving Credit Facility (ABL). The future available capacity under the ABL is subject to inventory and accounts receivable collateral requirements and the maintenance of certain financial ratios. As of June 30, 2021, the company had no borrowings and $128.8 million in letters of credit outstanding under the ABL.

As part of Alpha’s ongoing portfolio optimization efforts, the company is adding a fourth section at the Road Fork 52 mine, increasing its potential production of Low Volatile coal at a mine that has exceeded productivity expectations since its inception. Developing the fourth section at Road Fork 52 will require a modest amount of capital for the 2021 year, and we are raising our capital expenditures guidance as a result. Given the current market landscape and the tightness of existing coal supply, we believe this is a beneficial investment to bring additional incremental tonnage online before the end of the calendar year.

The company is considering other potential bolt-on or development projects for the near term, all of which would require modest projected capital expenditures. More information will be provided if these projects advance.

“On the whole, our mines performed well in the second quarter, reducing Met segment cost of sales by nearly $2 per ton and continuing robust production levels, leading us to slightly increase production guidance for the full year,” said Whitehead. “In addition to maintaining strong operational fundamentals, we continually look for opportunities to incrementally add value or improve our existing processes. In our view, the fourth section at Road Fork is not only a prudent use of capital with a payback expected in less than six months, but also it enables us to put some extra Alpha tons into a tight market.”


Notes:
1. Based on committed and priced coal shipments as of July 26, 2021. Committed percentage based on the midpoint of shipment guidance range.
2. Actual average per-ton realizations on committed and priced tons recognized in future periods may vary based on actual freight expense in future periods relative to assumed freight expense embedded in projected average per-ton realizations.
3. Includes estimates of future coal shipments based upon contract terms and anticipated delivery schedules. Actual coal shipments may vary from these estimates.
4. Note: The Company is unable to present a quantitative reconciliation of its forward-looking non-GAAP cost of coal sales per ton sold financial measures to the most directly comparable GAAP measures without unreasonable efforts due to the inherent difficulty in forecasting and quantifying with reasonable accuracy significant items required for the reconciliation. The most directly comparable GAAP measure, GAAP cost of sales, is not accessible without unreasonable efforts on a forward-looking basis. The reconciling items include freight and handling costs, which are a component of GAAP cost of sales. Management is unable to predict without unreasonable efforts freight and handling costs due to uncertainty as to the end market and FOB point for uncommitted sales volumes and the final shipping point for export shipments. These amounts have historically varied and may continue to vary significantly from quarter to quarter and material changes to these items could have a significant effect on our future GAAP results.
5. Excludes expenses related to non-cash stock compensation and non-recurring expenses.

The company plans to hold a conference call regarding its second quarter 2021 results on August 6, 2021, at 10:00 a.m. Eastern time. The conference call will be available live on the investor section of the company’s website at https://investors.alphametresources.com/investors. Analysts who would like to participate in the conference call should dial 866-235-9918 (domestic toll-free) or 412-542-4110 (international) approximately 15 minutes prior to the start of the call. 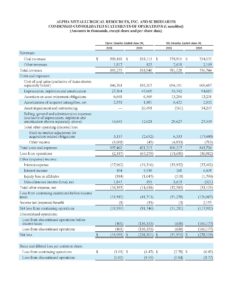 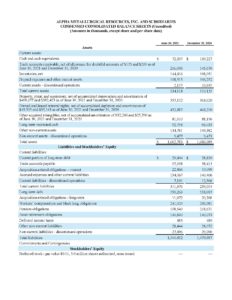 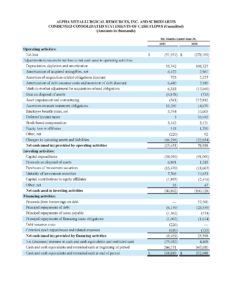 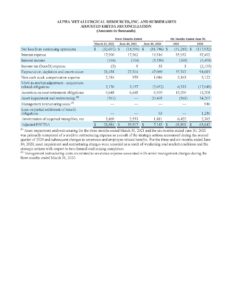 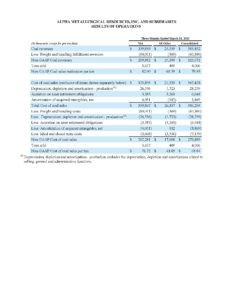