“Thanks to the continued dedication of our team, Alpha closed out the fourth quarter with an impressive $315.8 million in EBITDA and continued significant reduction in our long-term debt level,” said David Stetson, Alpha’s chair and chief executive officer. “In looking back on 2021, it was truly a transformational time for the company, complete with a name change to Alpha Metallurgical Resources at the start of the year and a series of important steps in solidifying our role as a leading pure-play metallurgical coal company and building on our role as the largest U.S. met coal producer. We transitioned our portfolio towards lower-cost and higher-quality operations, refreshed our board of directors, and completed refinancing of our ABL. Importantly, we are also making swift work of our balance sheet transformation. In a few short months we dramatically reduced the company’s long-term debt and legacy liabilities, further strengthening the already firm foundation that Alpha enjoys. We have continued this momentum with an excellent start in 2022 and, if coal markets remain robust, we expect to be in a position to eliminate our long-term debt within the calendar year. Given our cash generation projections for the year, I’m pleased to announce that our board has approved a $150 million share repurchase program to continue increasing shareholder value.”

Additionally, the board of directors has scheduled the company’s annual meeting of stockholders for May 3, 2022.

Total Adjusted EBITDA was $315.8 million for the fourth quarter, compared with $148.2 million in the third quarter 2021.

In the fourth quarter our net realized pricing for the Met segment was $180.66 per ton, while net realization in the All Other category was $62.56.

“Realizations for the fourth quarter continued to trend upward as expected, with our export business highlighting the benefit of the elevated global pricing dynamics in the metallurgical market,” said Andy Eidson, Alpha’s president and chief financial officer. “We look forward to future quarters when our 2022 domestic realizations are expected to improve significantly as a result of the negotiations completed by our sales team late last year. Even with lower domestic pricing that had been locked in long ago, our realizations on met coal for the quarter still came in at an average of $197 per ton.”

The table below provides a breakdown of our Met segment coal sold in the fourth quarter by pricing mechanism.

(in millions, except per ton data)

“As pricing for our products remains higher, we encounter elevated costs of coal sales levels as a result, especially for factors such as royalties and taxes which are tied directly to sales price,” said Jason Whitehead, executive vice president and chief operating officer. “We’ve discussed this in prior quarters, but my focus for the operations teams is to continue positively influencing the factors directly within our control, such as safety and productivity. These are the foundational elements that allow us to effectively manage our costs. On the whole, our teams have done a good job in this regard.”

“As we’ve reiterated consistently over the last several quarters, our focus continues to be debt reduction and creating a fortress balance sheet,” said Eidson. “In the fourth quarter, we made another $50.0 million in voluntary principal prepayments on the term loan. To put that in perspective, in the second half of 2021, we paid an aggregate of $101.1 million in principal, coupled with the previously announced payments to satisfy certain legacy liabilities. Since then, we’ve made another $150.0 million in principal prepayments on the term loan, bringing our current debt level to under $300 million. Assuming market conditions remain at levels similar to the last few months, we will be able to achieve our goal of aggressively paying off our debt in short order, while also maintaining an appropriate level of liquidity. In addition, we have enough visibility into near term cash flows to support the share repurchase program we have announced today.”

Cash provided by operating activities increased for the fourth quarter of 2021 to $104.3 million as compared to third quarter’s $96.0 million. Cash provided by operating activities includes discontinued operations. Capital expenditures for the fourth quarter were $22.9 million compared to $22.3 million for the third quarter of 2021.

In December 2021, Alpha announced the successful completion of its ABL refinancing.

As further optimization of our portfolio, the company closed a transaction on November 5, 2021 to divest the idled Delbarton mining complex and associated assets, which include Delbarton preparation plant and Kielty mine. Additionally, on December 31, 2021, the idled Edwight surface mine and certain associated assets were divested. Together, these divestitures resulted in a reduction in reclamation obligations of $18.0 million.

Subsequent to the fourth quarter close on February 10, 2022, the fourth section of Lynn Branch began operation, completing one of the 2022 strategic uses of capital. We continue to make progress on the other projects in Alpha’s previously disclosed growth capex plan for 2022.

Notes:
1. Based on committed and priced coal shipments as of February 25, 2022. Committed percentage based on the midpoint of shipment guidance range.
2. Actual average per-ton realizations on committed and priced tons recognized in future periods may vary based on actual freight expense in future periods relative to assumed freight expense embedded in projected average per-ton realizations.
3. Includes estimates of future coal shipments based upon contract terms and anticipated delivery schedules. Actual coal shipments may vary from these estimates.
4. Note: The Company is unable to present a quantitative reconciliation of its forward-looking non-GAAP cost of coal sales per ton sold financial measures to the most directly comparable GAAP measures without unreasonable efforts due to the inherent difficulty in forecasting and quantifying with reasonable accuracy significant items required for the reconciliation. The most directly comparable GAAP measure, GAAP cost of sales, is not accessible without unreasonable efforts on a forward-looking basis. The reconciling items include freight and handling costs, which are a component of GAAP cost of sales. Management is unable to predict without unreasonable efforts freight and handling costs due to uncertainty as to the end market and FOB point for uncommitted sales volumes and the final shipping point for export shipments. These amounts have historically varied and may continue to vary significantly from quarter to quarter and material changes to these items could have a significant effect on our future GAAP results.
5. Excludes expenses related to non-cash stock compensation and non-recurring expenses.
6. Rate assumes no further ownership change limitations on the usage of net operating losses.

The company plans to hold a conference call regarding its fourth quarter and full year 2021 results on March 7, 2022, at 10:00 a.m. Eastern time. The conference call will be available live on the investor section of the company’s website at https://investors.alphametresources.com/investors. Analysts who would like to participate in the conference call should dial 844-200-6205 (domestic toll-free) or 929-526-1599 (international) approximately 15 minutes prior to start time. Please use the access code 475225 to join the call.

ALPHA METALLURGICAL RESOURCES, INC. AND SUBSIDIARIES
CONSOLIDATED STATEMENTS OF OPERATIONS
(Amounts in thousands, except share and per share data) 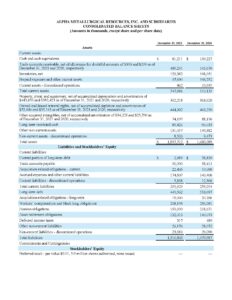 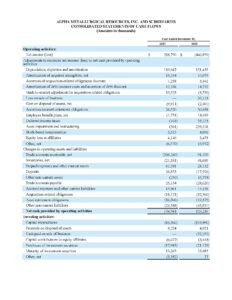 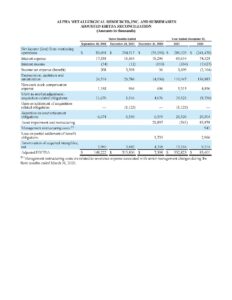 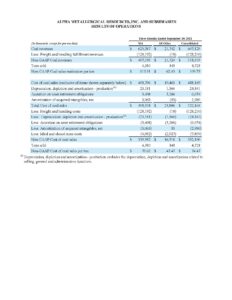